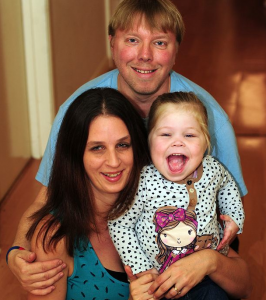 Have you ever heard of Beckwiths Wiedemann Syndrome? The most common part of the body to have accelerated growth is the tongue!

Olivia Gillies was born withh Beckwiths Wiedemann Syndrome(BWS). Doctors spotted the unusually large size of her tongue while she was still in the womb. This was the fourth child born to a 27 year old mother from England.

Olivia’s life was at risk because her tongue could suffocate her. She had a tracheotomy until she was old enough for surgery to reduce the size of her growing tongue. Her first surgery was at 6 months and she was in the hospital for 4 months until her Dad left his job to be her full-time caregiver learning how to tube feed his now ten month old daughter.

Within the year, she needed another surgery. She still couldn’t eat, talk or smile. She communicated with sign language. After the third surgery, doctors believe her tongue has stopped growing.

I have seen people with enlarged body limbs caused by this disorder, but I never heard of this disorder affecting the tongue. Everyday there is something to learn!

Read more about Olivia Gillies and see photos of her family.