Do You Love an E-Cigarettes? | Six-Step Screening
1

Electronic cigarettes, promoted as a healthier alternative to tobacco because it vaporizes nicotine, can actually glamorize smoking and lead people to smoke. Guess who is behind this market? Altria (Marlboro), Reynolds (Camel) and the nations dominant e-cigarette brand, Blu eCigs by Lorillard. Lorillard has spent $40 million last year marketing Blu. Currently, e-cig sales are at $2.5 billion.

What is in the vapor exactly? E-cigarettes deliver a nicotine-containing aerosol popularly called “vapor” to users by heating a solution commonly consisting of glycerin, nicotine and flavoring agents. E-liquids are flavored, including tobacco, menthol, coffee, candy, fruit and alcohol flavorings. A study from UCSF states, “E-cigarettes do not burn or smolder the way conventional cigarettes do, so they do not emit side-stream smoke; however, bystanders are exposed to aerosol exhaled by the user. Toxins and nicotine have been measured in that aerosol, such as formaldehyde, acetaldehyde, acetic acid and other toxins emitted into the air, though at lower levels compared to conventional cigarette emissions.’ Researchers found that markers of nicotine in nonsmokers who sit nearby is similar for both cigarette smoke and e-cigarette aerosol exposure. And, experienced users can attain nicotine absorption similar to that with conventional cigarettes. 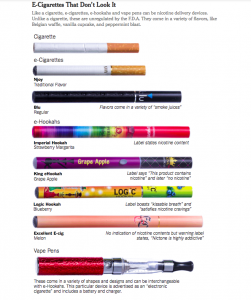 These companies claim: ‘We’re trying to redefine tobacco enjoyment and give smokers an alternative, one that potentially reduces harm.’ Marketing slogans include, ‘The Perfect Puff’ and ‘Let It Glow.’

The fact is, there is insufficient evidence on the product’s health risks and whether e-cigarettes are really prompting people to quit smoking. By defining the activity as ‘sexy, youthful and vigorous,’ they are driving people back to cigarette smoking. This is a major setback for public health and the National Campaign for Tobacco-Free Kids.

What can we do about this? EDUCATION. We cannot compete against the sexy ads promoting e-cigarettes, but we can be open and honest about what we know….and what we don’t know.
Here is what we can do:

Here is a recent article from the New York Times on the subject: A Bolder Effort By Big Tobacco on E-Cigarettes
If you have anything to add to this list, please comment!