When will healthcare providers do a better job recognizing the signs of oral cancer??? | Six-Step Screening
1

Dear Eva, I just had this crazy idea to contact you for advice/help.  I am a 5-year survivor of squamous-cell cancer, My treatment included a tonsillectomy and a maximum dose of radiation with chemo. Lately, from the moment I wake up, I have a super sweet/sour taste in my mouth and it continues all day. Food tastes like the taste in my mouth. Whatever is going on in my mouth is ruining my life!

Been to oodles of docs: ENT/gastro/radiation oncologist/chemo dr/dentists…all to no avail. Everyone blames it on radiation but doesn’t offer a solution. I seriously think it’s coming from under my teeth, but can’t find a doctor/dentist to listen to me.

Recently, I had one back top tooth pulled and one pending root canal.  The drainage continues. Also, I’ve been diagnosed with TMJ, but cannot find a TMJ dentist to evaluate possible leakage from there into my mouth.  One local DDS said he wouldn’t do TMJ surgery due to radiation. I didn’t want surgery, just someone to help me figure out what’s going on. I know it’s not normal, radiation or not!

Eva, even though I’m 74, I survived the treatment and living a life full of vitality and spirit as I was before the cancer. But when this horrible tasting drainage started about 1-1/2 years ago, I’m just spiraling downward without a clue how to proceed – what type doctor or dentist to visit, and where. I’ll do anything, go anywhere!

You probably deleted this by now, thinking I’m some sort of a kook. But if you haven’t, please let me know if you have an idea or contact. I live in Huntsville, AL and have been to both Vanderbilt and University of Alabama in Birmingham. One doc said it may be a sinus drainage, but that’s as far as I got.

In closing, I admire you so much for all you do and would love to do the same. Julia

Julia left her phone number. I read her message 15 minutes after she sent it. I could have written an email, but it seemed much easier to call. “Who is this?” she asked. I explained she just wrote to me, Eva Grayzel. Her silence told me everything. Her voice softened and she said, “I just can’t believe you are calling me.”

I replied, “I think I can help.” I had googled the words ‘oral medicine’. Dentists with the extra training in oral medicine have the extra education needed to uncover the deeper cause of a dental issue. I found a dentist in a nearby town whose bio was impressive. She was a member of the American Academy of Oral Medicine, performed thorough oral cancer screenings, had hygienists on staff (always something I recommend), and a nice website to boot.

I validated her feelings reminding her that she knows her body more than anyone does, and she is probably right about the taste coming from under her teeth. I confirmed that she is doing the right thing by visiting as many docs as she can until she finds an answer or a solution that feels right. Also, I asked if she would send me her story. She informed me she was a writer and would be happy to.

Dear Eva,
I was working as an illustrator/writer/editor for the Defense Intelligence Agency, located on Redstone Arsenal, AL. In the building I worked, they had new blood pressure machines installed in each break room. I went to check them out with some co-workers, and we noticed my heart rate was high. One co-worker showed me how to feel your heart rate by placing your fingers on both sides of your neck, under your chin. I did this, and felt a small, soft swollen area (maybe 1 – 2 inches long). It didn’t hurt and I never would have noticed it if I hadn’t felt there.

I went to my family practitioner to have it checked out. He said it was a swollen lymph node from a sinus infection, gave me some antibiotics, and sent me on my way.

Several weeks later, I checked the spot again and it hadn’t changed. I called the doctor. His nurse said, “Julie, you’re being paranoid. Leave it alone, it will go away.” So, I went on my merry way, but something kept making me check the area often. 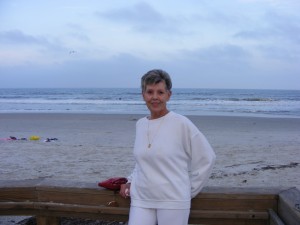 My husband and I were getting ready to go on a trip to Aruba to celebrate our 4th wedding anniversary, but I was still concerned about the swollen area, so I decided to go to an ENT. I had no idea what an ENT was when it was suggested I visit one, as I had never been sick, and my family doctor usually handled my health issues. He ordered a needle biopsy, which as it turned out was negative. I was elated and we went to Aruba. However, the entire week in Aruba, I couldn’t stop thinking about that spot under my chin, which hadn’t changed at all.

I was a smoker, and had been for about 25 years. I had cut back to about 1/2 packs a day. When we returned home, I decided to go to yet another ENT for a second opinion. All he did was look at the results from the first ENT and my family doctor and basically said, “Let’s just watch it for a while and see if it goes away.”

Several more months went by, the spot was still there. My husband shined a flashlight down my throat reporting the right tonsil was slightly redder than the left, which the second ENT had noticed and for which he prescribed a different antibiotic.

I decided I wanted to have my tonsils removed. Both ENTs were totally against it because of my age. I insisted and he reluctantly agreed.

Guess what? Under the right tonsil was squamous cell cancer, which by then had spread to lymph nodes on both sides. By the time I was diagnosed, it was Stage IV.

I had seven weeks of radiation with one day/week chemo. I suffered all the effects of radiation/chemo including a PEG feeding tube for about a year. I was so miserably weak/sick and decided to retire from a job I loved for 35 years.

All of my PET scans have shown no evidence of cancer. However, about a year and a half ago, I have had swallowing problems and a bad taste probably associated with treatments. I am coming up empty-handed with no hope for a solution, that is until you called.

Eva, you haven’t a clue how much I appreciate you replying to my “plea for help,” and actually taking the time to call me.

I told her I will send a message to some doctors about her current issues. I have made some wonderful friends in dentistry who are generous with advice, even when they don’t see the patient. There are many professionals out there who care and want to help, like I do.

You may know that Michael Douglas complained for months about his hoarse voice, saw the best doctors in NYC, and ultimately was diagnosed with oral cancer, but much later than it could have been. If you know me, Eva Grayzel, my story is the same….and here is just another one of many stories of a classic delay in detecting oral cancer. What can we do to make a difference?!?!?!