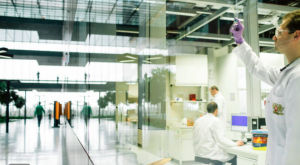 Even though the rates of oral cancer associated with tobacco are declining, it is still a major cause. Smoking replacement products like gums and patches have generally failed because they release nicotine too slowly or in amounts too low to satisfy smokers. For the same reason, only a small percentage of smokers have switched to e-cigarettes, devices that heat a nicotine-containing fluid to create a vapor that users inhale.
Major tobacco companies are deploying their financial resources to dominate the huge market for cigarette alternatives. They need to replicate the sensory aspect, the taste and the satisfaction of an immediate nicotine delivery, but with fewer risks.

Philip Morris International in Switzerland has automated smoking machines that draw on heat-not-burn tobacco delivery devices and then send the resulting vapor through a series of tubes to a machine in an adjoining room. Cells resembling those found in the human lung are grown in the machine. After the vapor hits the cells, they are cultured and taken to other laboratories in the building where researchers examine them for biological or genetic changes. Philip Morris is also running clinical studies to measure the level of toxic compounds in the blood and urine of people who use the new devices.

We still don’t know if the risks of e-gigarettes are lower than smoking. But, we do need to be concerned about creating a new generation of nicotine addicts. Your thoughts?