Oral Cancer Commercial and The Problem It Caused | Six-Step Screening 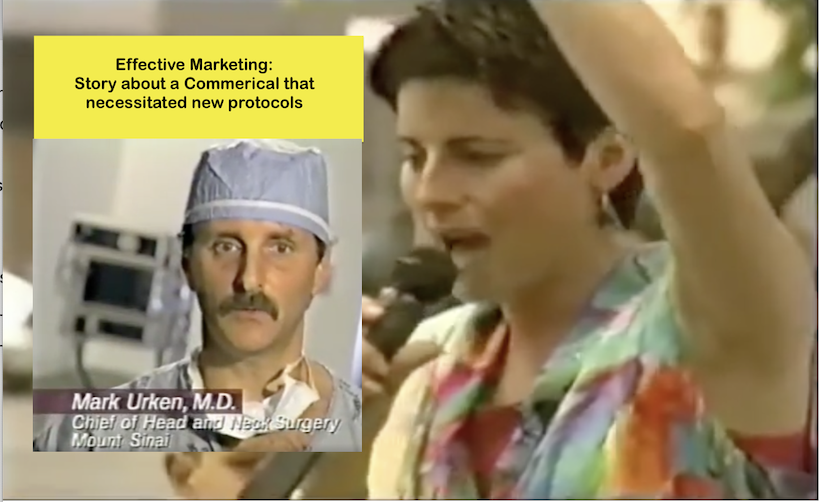 A great marketing commercial for Mt Sinai Hospital Head/Neck Department ended up causing problems because it was just too good! The commercial was filmed in Easton PA, after my interactive storytelling performance in center square for a summer festival.

I speak and eat normally and have no facial disfigurement after radical surgery for stage IV oral cancer. This procedure was performed at Mt Sinai Hospital in New York City in 1998 by Dr. Mark Urken, a pioneer in this kind of surgery. 1/3 of my tongue was removed and reconstructed. Tissue from my forearm was used to replace the outside of my tongue, and an artery was taken to feed blood from the carotid to the graft site. I have 3 grafts on my leg. Two were a free-flap procedure, where fascia was used to build the density in my tongue. A third graft replaced the tissue on my forearm. My recovery was extraordinary. More about my story.

A year later, I was asked to do a commercial for the head and neck department of Mt Sinai Hospital. After the commercial aired, they got an influx of calls from people who had abnormalities in their mouth and wanted to know if it was cancer. It was an absolute headache! They were head and neck cancer experts and had no interest in diagnosing pizza burns and canker sores. The great marketing was so effective, the department had to put a new protocol into place. All patients must be referred by a physician.

Now, Dr. Urken has a world renown reputation, and doesn’t need marketing to have a packed waiting room. I was lucky to have had my surgery with Dr. Urken. Now, almost 25 years later, he is nearing the end of his career, and I am living proof that when patients are referred to an expert in the kind of surgery the patient needs, the outcome is better.