Corey had braces for a couple of years and wasn’t much of a complainer although the braces irritated the inside lining of his cheek frequently.  After the braces were removed, there was a residual area on the inside lining of his cheek which was sore and wouldn’t heal. In fact, it continually got worse.  He was eventually diagnosed with myofibroblastic sarcoma of the oral cavity, a rare type of sarcoma. 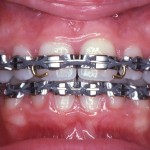 I first met Corey at a Celebration of Life party where I was speaking about survivorship.  The mom who organized the party for her daughter wanted to be sure I acknowledged the five other high school age cancer survivors present who her daughter befriended while going through treatment for cancer.  I recall meeting Corey, his twin brother, and his parents as we talked about our oral cavity cancers

This year, I received a donation for the Oral Cancer Awareness Walk in Bethlehem PA from the mom who organized the party, and it was in memory of Corey.  She told me how Corey was so sick at his graduation ceremony from high school that he was driven up in a decorated tractor to receive his diploma.  His twin brother helped escort him.