The Most Common Symptom of Oral Cancer | Six-Step Screening
4 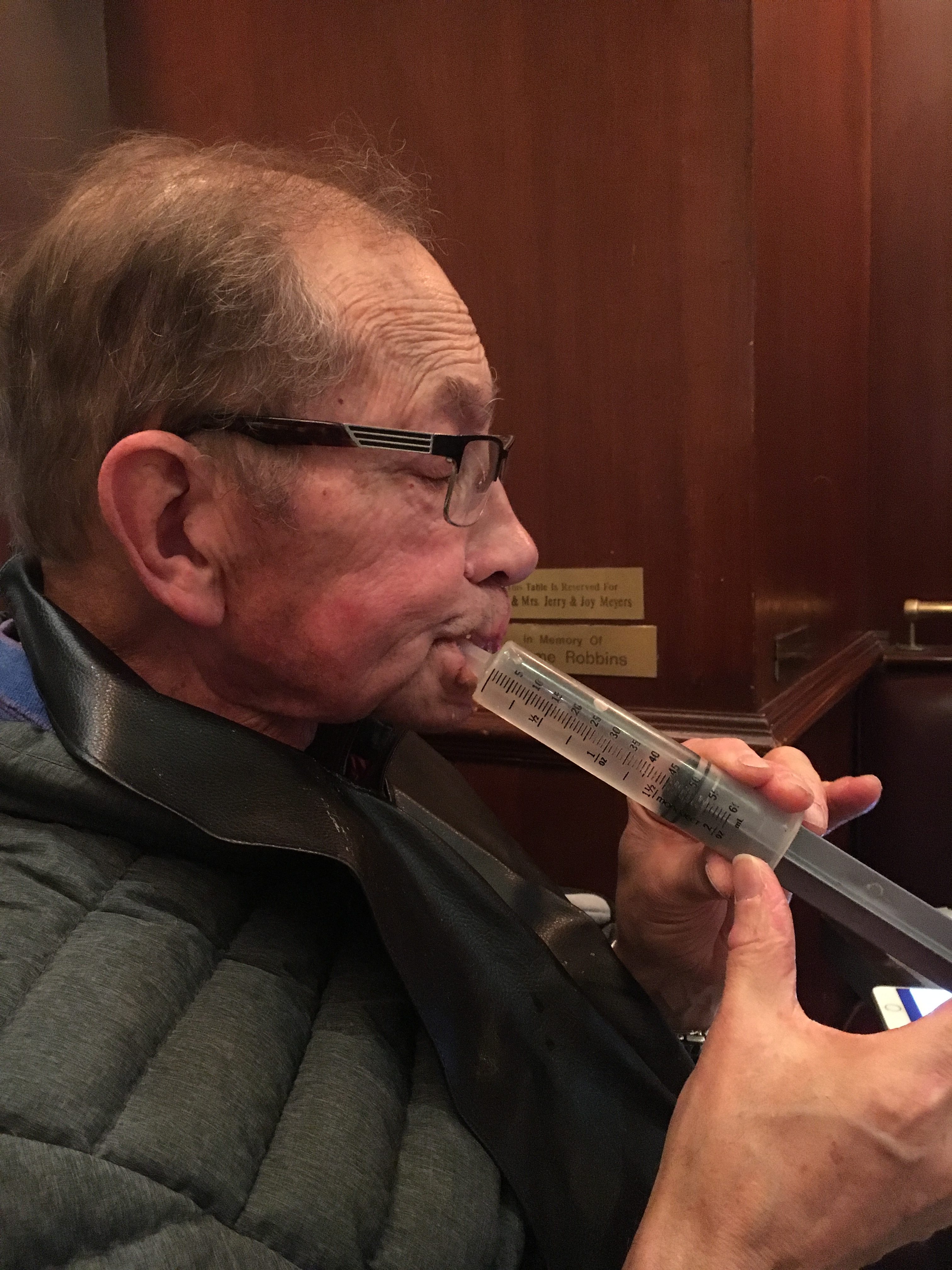 If anyone can give lessons on coping with life challenges it’s Neil Arnold. What is it like to be Neil, a retired OBGYN and 24-year late stage oropharyngeal survivor? Neil no longer speaks. He is a laryngectomee and due to recurrences, he can no longer articulate words. He lives in silence.

What impressed me was his staunch independence. When the waiter approached our table asking what we wanted, he typed his answer on his iPhone and held it up for the waiter to read. As my mom and I conversed with him and his wife, he participated by typing his contribution to the conversation without allowing the frustration of delay affect him.

After we ordered the cheesecake, he unzipped the large square-shaped bag he carries everywhere. I leaned over and saw the Magic Bullet, a compact device to puree food. Four pouches held the cup attachments. Each cup had a different color of food leftover in it from his dinner: brown, green, orange and yellow. The brown was the meat he pureed with some water. The orange was sweet potato. The yellow was matzah ball soup. The green was vegetables. There was also a cup that had an extended lip which he got on a cruise ship (the refillable soda package cup) which helps him to drink more easily. In fact, he told me the story about someone who saw him using the cup and and offered her collection to him which he accepted readily. Now, he keeps one in his car, a couple at home, one in his bag, one at his daughters place…

Most people who ask to sit near an outlet at a restaurant, do so to charge a device. Neil Arnold uses it to plug in his Magic Bullet. He tried the battery operated one, but it was just not strong enough to puree his food.

Neil didn’t need to puree cheesecake, but he had other necessities inside his bag. First he pulled out a large plastic-coated bib that his seamstress handmade for him. After he set up the standing mirror, he took out a large syringe and sucked up some water from his water glass. Slowly, he squirting the water into the corner of his mouth where he feels the most. Then, he dug into the cheesecake with the fork. He got most of the forkful into his mouth. Because he doesn’t feel his chin, he checks the mirror to see where he dribbled food and wipes his mouth as needed.

My mom talked to his wife Naomi as I conversed with him about his story. What were his symptoms?

He complained of pain in his jaw. He was prescribed a topical lidocaine for pain relief since they assumed it was inflammatory from grinding. With no relief, he saw a neurologist. Then a pain management specialist who tried a localized nerve block.  Finally, an ENT ordered a CT scan with contrast. He had a tumor at the base of his tongue.

Over the 24 years of his survivorship, he had recurrences, each one stealing a little more from his quality of life: facial disfigurement, easting, speaking. One recurrence was diagnosed after his loose teeth were pulled. Another after a biopsy of his upper esophagus. That surgery resulted in the removal of his jawbone and a new one fashioned from his right fibula.  Within six weeks he took his grandson to NYC with a gastric tube in place, walking without a walker or a cane.  The gastric tube has long since been removed.

After his fibular transplant, the hospital he worked at as a well-loved OBGYN no longer wanted him to practice. They were fearful patients might not understand him particularly in an emergency and then something might be done without consent which could lead to a big lawsuit against the hospital.

It was hard for Neil to retire, but within a year, at age 68, he had a laryngectomy (now almost 6 years ago). Those who have a laryngectomy are called ‘laryngectomees’. Nine months later, he had surgery for another tumor. Six weeks after that when another tumor appeared, he was put on oral chemotherapy as the doctors said they could not operate again.  Three months after that, he got the good news the tumor was gone.  He continues to take oral chemotherapy.  During this time he traveled to Israel twice, cruised the Danube, the Mekong Delta, around the Caribbean and Alaska.  Nothing stops Neil from living life to it’s fullest.

Often, when I travel to speak in different cities, I contact oral cancer survivors I’ve been in touch with and invite them to hear my presentation which often validates their feelings and provides them affirmation that they are not alone. But, I didn’t make a plan to meet Neil, who lives in Minnesota. I took my Mom to see the Broadway show Oslo for Mothers Day. Neil was living his life, attending a family celebration in Connecticut and spending a few days in The Big Apple. Of all the shows I could have chosen for a Mother’s Day gift, of all the seats to be assigned, I sat beside oral cancer survivor Neil Arnold, who taught me how oral cancer can’t take away your ability to still enjoy life.