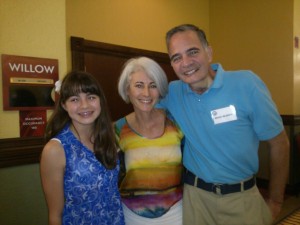 Ironically, flying to El Paso, I sat next to a woman on the airplane who told me her brother was attending a survivorship event because he wanted to meet one particular speaker….and I was that speaker! We only met in person once but when you meet another oral cancer survivor, there is an immediate bond. No one really understands what its like to undergo treatment for oral cancer unless they have been through it. The part of the body at risk, is a part you cannot hide under clothing; a part that allows us to communicate our thoughts and feelings; an essential part of our appearance. And, the treatment…as my radiation oncologist told me, ‘radiation to the head and neck is the most difficult part of the entire body to tolerate treatment.’

This photo was taken in August 2013, when I lectured in El Paso Texas for the Rio Grande Cancer Foundation. Hugo’s daughter impressed me. Strong, articulate, smart, sweet…. just like her dad! It is our duty to remember those who have passed. I remember my friend, Sara’s Dad, Hugo, by attaching the letter his sister sent me.

Dear Eva,
My brother Hugo lost his battle with cancer on November 22, 2014. He courageously fought to regain his health for over a decade, but ultimately succumbed to complications. After jaw reconstruction in May 2013, the cancer returned with a vengeance. After unsuccessful antibiotic treatments for infections, chemotherapy and infusion treatments, the tumor grew at an alarming rate, which ultimately required a trachea so he could breathe and not feel like he was suffocating. He lost the ability to speak, which was devastating for his profession as a drug sales representative. The tumor was so aggressive, it managed to find its way through his scars from his jaw surgery and expand on the outside of his neck. The doctors advised him they were unable to do anything further after the tumor positioned itself in the front of his mouth, causing a major bleed that ultimately required 3 blood transfusions. Hugo ended in hospice on September 17th. Fighting till the end, we all had hope that maybe a miracle would happen. Watching him fade day by day was disheartening, especially for his beautiful daughter Sara.

Always sporting his cancer bracelets and using Facebook as a platform to promote early screening for Oral Cancer, his goal was to make sure everyone was aware of this horrible disease that most didn’t know existed. He always maintained a positive attitude that everything would turn out alright. His faith never wavered. Eva, Hugo was in awe of your passion for the cause and was “star struck” when he met you last year.

I just wanted you to know you were an important part of his life even though you didn’t know it. Sometimes people don’t realize they’ve inspired someone without even trying. It’s your passion for the cause that makes you extraordinary. I was so happy I had the pleasure of “chatting” with you on your way into El Paso last year. Thank you for your inspiration and continued fight. I too will continue to promote awareness on behalf of my brother Hugo. Hopefully, our passion will pay off and save lives.

Thank you Sandra for taking the time to share these thoughtful heartfelt words. I’m humbled knowing I made a difference in Hugo’s life. Passion pays off. I, too, will go forward in my work in memory of Hugo.