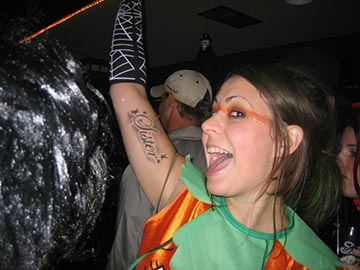 Melissa was diagnosed with stage 4 tongue cancer on March 13th 2009, at the age of 26. Her only symptom was a growth on her tongue, which she believed was caused by a broken tooth.

Melissa underwent surgery at Memorial Sloan Kettering in April where her doctors removed a portion of her tongue and reconstructed it with tissue from her left forearm. Soon after, she began aggressive chemo and radiation treatments. After her courageous battle through treatments, on October 8, 2009, Melissa was informed the cancer returned. Although Melissa had been a smoker, her doctors did not feel it was the cause of her cancer.

Melissa was a vibrant person who loved and cared deeply for her family and friends. Her favorite things in life were her furry friends, Halloween, and of course her shoes! Melissa had a unique personality and the smile to perfectly compliment it. Although her journey through this aggressive and ugly disease was short, she fought her heart out! Melissa lost her battle with oral cancer on January 22, 2010. Our loss is enormous and still quite raw. She truly NEVER gave up and fought until the very end. Melissa will always be remembered by the ones who love her and feel her spirit in their everyday happenings.

Eva is so passionate about oral cancer awareness and it’s an honor to be included on this advisory board. After losing my daughter, I felt completely helpless and desperately wanted to help prevent this disease from taking another parent’s child. Now, I can make a difference.