Trust in Your Doctor and Quality of Life | Six-Step Screening 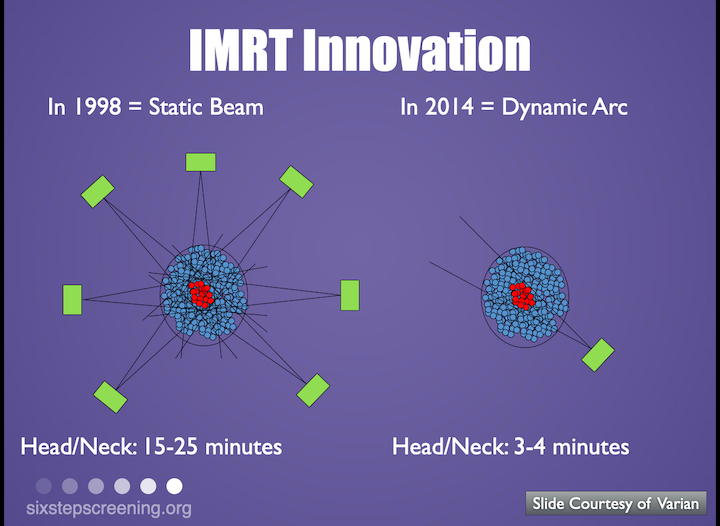 “How many people have you treated for oral cancer (or head and neck cancer) with this new technology?” I asked Dr. Vigneri, the second radiation oncologist I interviewed. The first doctor used standard radiation, a 2-minute treatment that indiscriminately zapped everywhere in the vicinity. Imagine throwing a can of paint on a canvas: that is what standard radiation is like. Dr. Vigneri used a new radiation equipment called IMRT, Intensity Modulated Radiation Therapy, a 25-minute treatment targeting the tumor site with the maximum dose. Emitted at different angles, the normal tissues and glands around the area were protected from the damaging effects of a full dose of radiation.

“To be quite honest with you, Eva, you would be my very first. But, I vow to give you the best care possible.” He didn’t mask the truth. This answer provided a sense of trust. Explained in way I could understand, IMRT has the capacity to block an area from radiation beams. He suggested radiating both sides of my neck since there was a 10% chance the cancer came over to the right. However, he recommended blocking the salivary gland on the opposite side. He believed there was a less than 1% the cancer would travel across my neck and up into the salivary gland. Blocking this gland, would allow it to function normally and produce saliva which would provide ‘a better quality of life.’

I learned there were only 12 IMRT machines up and running in this country when I had treatment 23 years ago. Now, it’s the standard of care. Treatment for oral cancer is barbaric and devastating even with the targeted therapy. I know survivors who were treated around the same time I was with standard radiation. Their quality of life is greatly dissimilar to mine. I got lucky not only with new technology but with a doctor who I trusted. Every year, around my cancerversary, I contact both my surgeon and my radiation oncologist just to say thank you.