“What Does RDH Stand For?” | Six-Step Screening 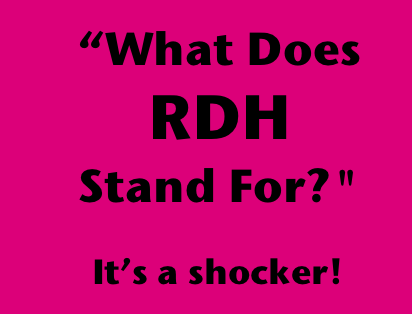 Plain and simple, it’s shocking. If you are in dentistry, you know. If you aren’t, even some of the smartest people you know, may not know! My friend Tina is a physician, a radiologist specializing in women. She is hyper vigilant about using all natural products including her mattresses, rugs, creams and foods. Tina is my go-to person when I have a health question.

When she has questions about dental issues, she discusses them with me. Not that I’m a dental professional, but I’ve got connections. I hear a lot of prominent speakers at the conferences I speak at, so I know a little something:)

She read a couple of articles that the floss she was using may contain a chemical called ‘poly-fluoroalkyl substances.’ PFAS is used in common household products to resist heat, oil, stains and water. Tina ran out to the health food store and bought a brand of floss clearly marked ‘Free of PFAS.’

I emailed some hygienists who are knowledgable about the science behind dental products. It was unanimous that it was a non-issue.There weren’t studies done to prove the chemical leaches into humans and the floss was FDA approved. I forwarded their responses to Tina. I did not include their titles, only their names. When she asked, “Who is Ann?” I replied, “An RDH.” Her next question was, ‘What’s an RDH?

Even in the context of writing about dental products; even though Tina is a physician; she did not know what RDH stands for. Dental professionals, are you reading this? What this means is, your patients probably don’t understand what RDH means either! The fact alone diminishes the value of their job. When you list your team members on the website, spell out Registered Dental Hygienist.

Knowing Tina, she would have looked it up first before asking. So, I typed in my search bar ‘What does RDH stand for’. At the very top, I saw a shocking explanation:

RDH is an acronym, abbreviation or slang word for “rate, date, hate.” The word is commonly used on social media platforms. When you give someone an RDH, you:
1. Tell them what you would rate them from 1-10 based on looks.
2. Whether you would date them or not.
3. Whether you hate them or not

If this isn’t enough, I read other links:

RDH: Remiss Devastated Heartbroken
“If I miss the concert tonight I will be totally RDH.”

And, there was more!

RDH stands for Real Depression Hours, that feeling at the end of the day that makes you want to kill yourself.
‘Even though I had a pretty productive day, those RDH are hitting me hard.’

After reading these, I hope you concluded it’s more important than ever to spell out, Registered Dental Hygienist (RDH). Let’s say it again and again. Raise the value of the person that spends more time with a patient than anyone else on the dental team.